Available or coming soon from Udigrudi books and Movies:

(Des Sousa, 2021) Pitcher is obsessed with microbudget films (like The Blair Witch Project) and wants to make her own. She thinks that all she needs is money. But, when repeated rejection almost drives her to give up, Pitcher’s dying father asks her to go to the film festival.

There, she enlists a rag-tag group of rejected filmmakers and encounters a talking roll of toilet paper, and the devil himself, when they decide to make her film a reality.

The only problem is the award-winning director, whose subtle abuse is overlooked because of power and prestige.

The Slimebag Project deals with cancer, addiction, workplace trauma, and grown-up themes and is therefore not recommended for young readers.

The Slimebag Project eBook is available from Google Play and Smashwords.

Ever been stuck in an elevator with someone you don’t like? Or had to sit next to the most annoying kid in class?

Well, imagine being stuck under a quiet street in Neath, with the three most annoying people in Wales?

Don’t even go there, you say? Let’s just hope you can leave your underground tomb alive.

Smashwords – Under Quiet Neath – a book by Des Sousa

Ever since she visited the salon as a little girl, Gingerlocks dreamed of owning it. She worked there diligently for years and was saving up to buy the place until suddenly on the same day she got fired and started going bald.

In an argument where the scissors flew faster than tempers, Gingerlocks kills her former Boss. She forges her former employer’s signature, to achieve her dream of running the salon and attempts to continue business as usual.

The only problem is silencing those pesky witnesses and anyone who gets too suspicious. Soon, the quiet town of Merthy Tydfil discovers just how deadly a pair of scissors can be.

Parental warning – in case it isn’t obvious from the description, this play is not recommended for children.

Smashwords – Rinsed in Blood: The Merthyr Murders – a book by Des Sousa 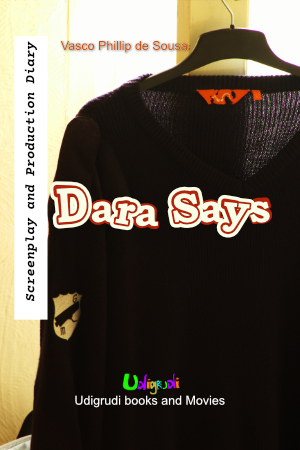 “Dara Says” was Ptara Ltd’s first microbudget film. They originally budgeted the script 120k, but the filmmakers didn’t raise even a tenth of that. In the end, they shot the entire thing in their small terrace house, with less than six k in the bank, yet everyone (other than the director and producer) got paid.

How do you pay everyone without money? How do you make a full-length film without money and without asking people to work for free? Read the microbudget script and follow the story of how it got made.

This family doesn’t waste time, in life or in death. When the Matriarch dies, the rush to plan and get to the funeral causes the youngest member of the family to fall out of the car. Will junior survive? Will the dog fall off the route? And most importantly, will everyone have their homework done on time?

So short that we decided to add some other short scripts. Altogether, this collection of short scripts adds up in word count to a full-length play.

The Sorrows of Deirdre